The Tale of Scalemail & Ixora

Empowered by a mystical force, Hallie and Eric couldn't be more different than the other in just about every way. But when they are both chosen by said mystical entity granting them the power to fight bigotry, they're forced to find common ground and stand by each other.

Set in Singapore, a country still ruled by a backward government that maintains laws criminalising sexual contact between males, the presence of LGBTQ characters in media, homegrown or imported is rare.

​Scalemail & Ixora portrays but an example of the discrimination and unjust treatment the LGBTQ community faces in a supposedly first-world country. While the story itself is still a true blue superhero tale, the trails and tribulations of our heroines still craft them into the heroes they are.
​​

While most teens dream of being da shit, Erica "Eric" Chan-Chandran just doesn't give a shit. Freed from the bondage of social norms thanks to her "untrendy" interests, Eric's taken the opportunity to be open about her pansexuality, and has since enjoyed life more than most of her peers.
​
With an active interest in bettering the world, with a passion for embodying the heroes she reads about, Eric's always been a superhero just in need of powers. 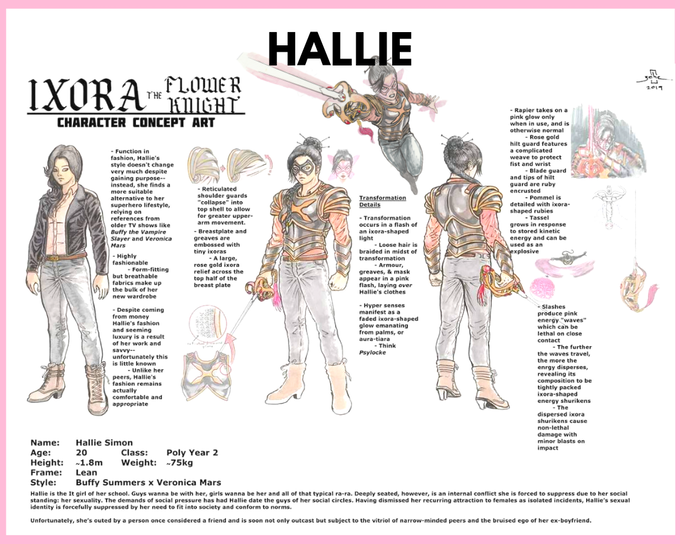 Hallie Simon on the other hand, has had the misfortune of being the most popular girl in any room she enters. The girl who's had everything but the freedom to be, Hallie's recent outcast status might end up being a blessing in disguise.
​
Finally granted the opportunity to find who she really is, Hallie finds herself on the path towards becoming a defender for those like her.

SUPPORT SCALEMAIL & IXORA BY BUYING THEIR COMIC FOR JUST $5!